Who and or what is the Krampus you ask? Well, let me share the legend with you. It is ancient, obscure, and terrifying. Kind of like the world of Sid & Marty Krofft, but without the acid trips.

According to the legends in parts of Central Europe the Krampus is an evil demon that accompanies Saint Nicholas on his round, to punish the naughty children, and scare them into being good. 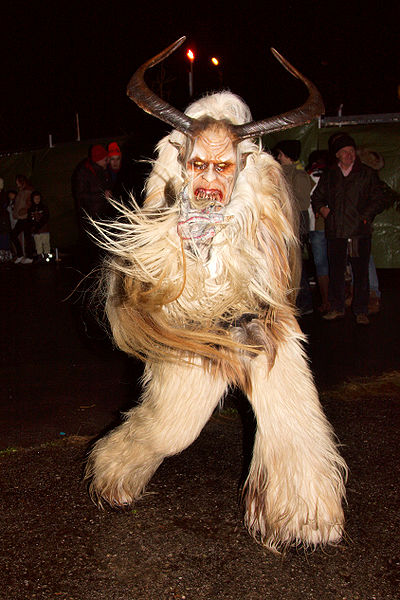 Seriously! I am not making this up!

The evil Krampus is meant to scare the little brats into behaving, so that they can receive treats from St. Nicholas. Like lumps of coal in the stocking, the Krampus is a Christmas-time “scared straight” program for kids.

Even today in Austria, Switzerland and other Alpine countries, young men will honor the tradition of the Krampus by dressing up like demons, and wandering the streets with rusty chains, and bells, chasing women and terrifying small children. Thankfully they wear devil masks so we can distinguish the Krampus from a typical Saturday night in Vienna, or Zurich.

Just another night out in Salzburg

According to Wikipedia, in some rural areas the tradition also involves the “birching” of women. I’m sure Freud would have a field day with that one. Who knows? Maybe he used to put on a devils mask, and go out spanking women too. He always did strike me as a kinky old perv.

Don’t ask me how I know this stuff. It is already well established that my brain is chock full of useless information. Being descended from a long line of passive aggressive Germans, Austrians, and Croatians, I am somewhat amazed that my parents never threatened us with the terror of the Krampus to keep us from being naughty. I am also thankful. Apparently, drinking water will not prevent the Krampus (Ba-Dum-Bum!) and just seeing these photos is enough to scare the bejeebers out of me. 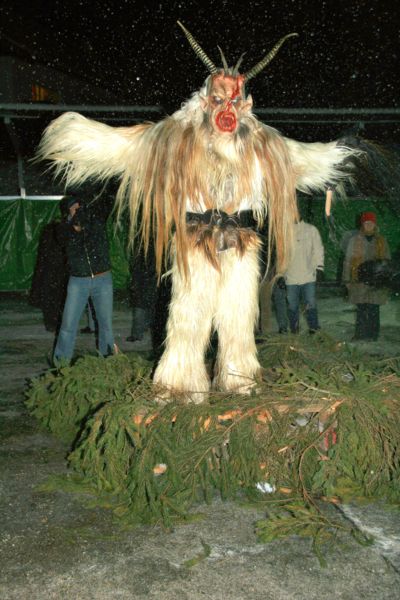 This will haunt your dreams. Merry Effin Christmas!

Like most Christian traditions, there is a pre-Christian pagan ritual at it’s root. Unfortunately, in my years of researching the interwebz most of the info I have found about the Krampus is on German language websites. About all I have been able to uncover is what I have already told you.

In my opinion, the legend of the Krampus just seems to confirm one thing. German’s are scary when they get drunk. Seriously, let them have a little too much Schnapps, and Lager and before you know it they are invading the Sudetenland. They are like Gizmo & Water that way.

28 thoughts on “Beware the Krampus!”